Our shop is the oldest in Almería.

We do not know exactly the date when it was set up because at that time there was no need to get permits or paperwork to set up a business, that is why there are no written documents, but it was circa 1870.The founder was Vicente Ivorra Román, (Born 1842) who organised caravans of mules to sell pottery from his home village, Agost in the province of Alicante, to Andalucia. Finally he decided to settle in Almería, founding the shop that he called 'El Valenciano' (The Valencian), as he came from the region of Valencia and Valencian was his mother tongue. The shop is still located in the same place as then and it has been passed on from fathers to sons, the current owner now being Andrés Ivorra Jimenez, great grandson of its founder.

Then things were very different. There were very few shops and they sold virtually all kinds of goods, from food to shoes, and remained open all day long and part of the night, closing only to sleep. Even some of the assistants slept in the back-room, so that their lives were almost completely dedicated to the business. With very low taxes to pay, and the workforce quite cheap, the profit margin was so low that it would seem laughable to us. But, if prices were cheap, on the other hand there was a lot of poverty, and not everyone could allow themselves excessive outlays. 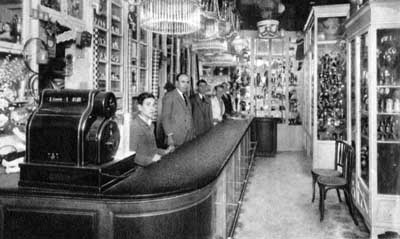 During the civil war (1936 - 1939) everything was sold out, even broken or unusable items, All the shop becoming empty of saleable goods. (Almería remained on the Republican side), People searched the shops with their pockets full of money seeking to buy whatever was for sale. When customers came in, they were told 'we have no more' without even asking them what they wanted.

When the war ended some of our suppliers were paid debts from before the war, as we have always been known as good payers .

Now, our shop has more than double the space dedicated to the public than in the early days, and although it has been almost completely refurbished, the outside stone walls still remain and so does the mahogany counter that can be seen in the photograph, taken in 1935. In that photograph can be seen the second owner (2nd left) Vicente Ivorra Brotons. The child would become the third owner, José Ivorra Carrión.

If you continue browsing, we consider that you agree to it Learn more

A cookie is a small piece of text sent to your browser by a website you visit. It helps the website to remember information about your visit, like your preferred language and other settings. That can make your next visit easier and the site more useful to you. Cookies play an important role. Without them, using the web would be a much more frustrating experience.

These cookies allow our websites to remember information that changes the way the site behaves or looks, such as your preferred language or the region you are in.

Google Analytics is Google’s analytics tool that helps website and app owners to understand how their visitors engage with their properties. It may use a set of cookies to collect information and report website usage statistics without personally identifying individual visitors to Google.

This cookie is used to redirect visitors to their preferred language.